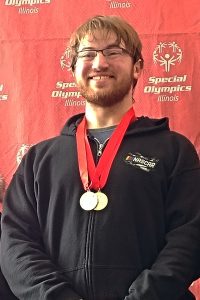 The Special Olympics Illinois Winter Games is one of nine state sports competitions, and the final state competition for Snowshoeing and Alpine Skiing events. Over 450 athletes competed at the event at Chestnut Mountain Resort in Galena, including three from SEASPAR’s Special Olympics program.

William Porch of Westmont (pictured) earned a gold medal in the Snowshoeing 800M event and a silver medal in the 1600M event. Porch transitioned to Snowshoeing when Special Olympics discontinued Cross Country Skiing, the sport in which he earned gold medals at Winter Games each year from 2013-2017. But he brought his speed and endurance to his new sport – the 1600M event is one full mile of snowshoeing!

Michael Drabik of Woodridge also competed in Snowshoeing and took bronze in the 200M event. This was Drabik’s second trip to the Winter Games, having earned a gold medal in Cross Country Skiing in 2017. Like Porch, Drabik has successfully transitioned to his new sport of Snowshoeing.

Michael Duffy of Westmont earned a bronze medal in the Alpine Skiing Super G (downhill) event, and took fourth place in the Giant Slalom event. Duffy has medaled in the Super G event the last three years, earning gold in 2017.