Visitors to SEASPAR’s office are greeted by an “International & National Athletes Wall of Fame.” The Wall of Fame is a group of plaques honoring the 11 SEASPAR Special Olympics athletes who have been selected to compete in World or USA Games over the last 40 years. 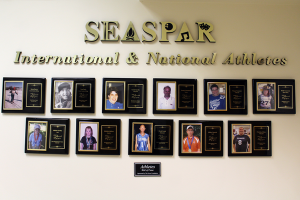 “The Wall of Fame is not, and has never been, done. It’s always been a work in progress. This wall will never be completed,” said Susan Friend, Executive Director, as she addressed the athletes who appear on the Wall of Fame, along with their families. “Today, we’re stopping time at SEASPAR’s 40th anniversary to change the fact that we have not recognized this group of people at one time and place.”

That time and place was on October 30, 2016, at a dedication ceremony of the Wall of Fame at the SEASPAR office. The event honored the athletes, their families, and their coaches. It gave them an opportunity to reunite and celebrate their hard work and success.

Eight of the 11 athletes whose faces grace the wall attended the ceremony, and all were asked to share a few memories from their experience competing at the national or international level.

Many of the athletes spoke of the thrill of winning, as they proudly donned the medals they earned in the competitions. David Svitak of Downers Grove, whose Team Illinois earned gold in Basketball at the 2010 USA Summer Games in Nebraska, recalled, “Coming back home with a medal around my neck was just a really good feeling.”

Jeff Osowski of Downers Grove, who earned a bronze medal in the 9-Hole Golf event at the 2014 USA Summer Games in New Jersey, is a man of few words but impressed the crowd at the ceremony with a demonstration of his winning swing.

However, many of the athletes’ most treasured memories were not of their achievements in competition, but of their multitude of experiences as they traveled, saw new places, met new people, and enjoyed everything that the trips to competitions had to offer.

Cindy Zajecka, formerly of La Grange Park, was SEASPAR’s first World Summer Games athlete in 1995, where she and Team USA took fourth place in Volleyball. The Games were held in New Haven, Connecticut, and Zejecka recalled that she especially enjoyed the “away from home” experience. 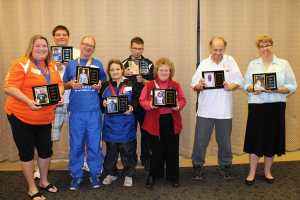 Michele Forzley of Westmont, who earned gold in 9-Hole Golf at the 2006 USA Summer Games in Iowa, remembered, “The opening ceremonies were awesome. Hootie and the Blowfish was playing.”

Forzley’s sentiment about the entertainment at Special Olympics events was echoed by Randy Naberhaus of Woodridge, who earned bronze in the Singles Tennis competition at the 2003 World Summer Games in Dublin, Ireland. When asked what his favorite moment was, he replied, “Seeing U2!”

As all of the athletes spoke about their experiences, a common thread emerged. Their fondest memories are of the people they met and the friendships they developed at the competitions.

“It was fun meeting different teams from different countries like Jamaica and Great Britain, besides meeting the people that I played USA Volleyball with,” recalled Wayne Neumann of Westmont, who competed in the 2003 World Summer Games with Naberhaus and brought home gold in Volleyball. “Some of the guys I still see at Special Olympics tournaments.”

Christina Schutz of Darien, who earned gold in Volleyball at the 2014 USA Summer Games in New Jersey, also remembered the people the most. “I still keep in touch with all of my friends from Nationals. I miss everybody.”

Molly Sosnowski of Lisle, who earned silver in the 2005 World Winter Games Downhill Alpine Skiing event on the mountains of Nagano, Japan, took a Conversational Japanese course at a local community college before the competition “to be able to make new friends.”

Sosnowski competed in three Alpine Skiing events and recalled, “When I was skiing in the Giant Slalom, I fell. But I got up, got my skis back on. My goggles were filled with snow, but I was able to finish the course. When I got to the finish line, I told my parents, ‘I trained not to quit.’”

Sosnowski’s determination was reminiscent of SEASPAR’s very first athlete to compete in a national or international Special Olympics competition, Karen Buron. Buron earned two gold medals in Cross Country Skiing at the 1985 World Winter Games in Utah. Buron passed away in 2001 but left a legacy of inspiration. Her family traveled from across the country to attend SEASPAR’s dedication ceremony.

Buron was a fierce competitor but also a model of sportsmanship. Buron’s brother Larry recalled Karen’s performance at the World Games: “The first day, there was a preliminary race and she kind of was in the middle of the pack, and our sisters who were there… knew she could ski a lot faster than that. And they said, ‘You know, Karen, you can pass people [on the track]. It’s okay to go by people.’ So the next day, when the gold medal competition was on, she started out again slow, and her sisters were on the sidelines going, ‘Pass people!’ And she did. She passed everybody and came in first by a long shot.”

Larry continued, “Karen was very proud of her two gold medals but if she were up here, what she would tell you is her favorite memory of the Special Olympics in Park City, Utah, is that she got to meet Marsha Brady.”

Like the other athletes who would come after her, Buron’s fondest memories of her Special Olympics competition were not of winning, but of experiencing new things and meeting new people.

The Buron family generously donated Karen’s two World Games gold medals to SEASPAR, to be displayed alongside her plaque on the Wall of Fame. SEASPAR is honored to be the steward of these hallmarks of Karen’s success and SEASPAR’s own history. The Buron family felt that SEASPAR is where the medals belonged; they were “sending them back to where it all started.”

View more photos and videos from the dedication ceremony on Flickr!