The Special Olympics Winter Games is one of nine state sports competitions, and the final state competition for Alpine Skiing, Cross-Country Skiing, and Snowshoeing events. Approximately 400 athletes competed at the event at Chestnut Mountain Resort in Galena. 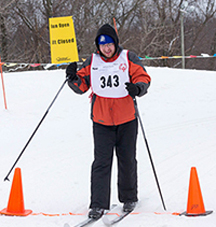 William Porch of Westmont (pictured at left) represented SEASPAR in the Cross-Country Skiing competition. Porch earned a gold medal for the fourth straight year in the 500M event, finishing almost a minute faster than the silver medalist. Porch is considered the fastest Special Olympics cross-country skier in this event in the state of Illinois. He also earned a bronze medal in the 1K event.

Porch has competed in the Winter Games for years, and also participates in our swimming program as one of the top 20 Special Olympics swimmers in Illinois in the 50M Freestyle and Backstroke events. Porch also qualified for the Special Olympics Illinois Summer Games several years for Individual Bocce play, one of few SEASPAR athletes to do so. Porch was honored in 2015 as the SEASPAR Athlete of the Year. 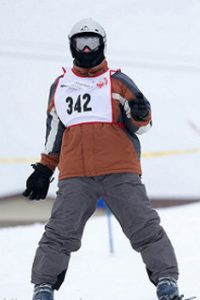 Michael Duffy, also of Westmont (pictured at right), earned a bronze medal in the Alpine Skiing Super G (downhill) event, and took fifth place in the Giant Slalom event. Duffy has participated in our Special Olympics alpine skiing program since 2008, but has only been skiing competitively since 2013. He has competed in snowshoeing events in the past, and also participates in our Special Olympics athletics (track and field) program.