The Special Olympics Winter Games is one of nine state tournaments held each year, and the final state competition for Alpine Skiing, Cross Country Skiing, and Snowshoeing events. Approximately 375 athletes competed at the event at Chestnut Mountain Resort in Galena. 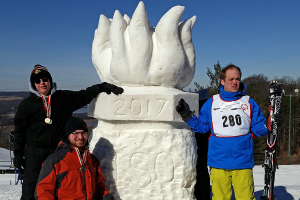 William Porch of Westmont and Michael Drabik of Woodridge represented SEASPAR in the Cross Country Skiing competition. Porch earned a gold medal for the fifth straight year in the 500M event, making up a minute in time to overtake the silver medalist by a ski length. Porch also earned a silver medal in the 1K event.

Michael Drabik earned a gold medal in the Cross Country Skiing 50M event and a silver medal in the 100M event. This was Drabik’s first Winter Games competition.

Join us in congratulating these athletes on their hard work and achievements!